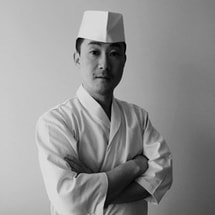 YASUHISA OUCHI
Chef / Owner
Born in Osaka, Japan 1974. Yasuhisa started his sushi chef career as an apprentice at age 17 in Japan. He took interest in the world of art and studied art graphic communication at college. At 30, he returned to the kitchen and relearnt sushi through self-study from the beginning. In 2010, he opened his first restaurant, Nigiriya in Toronto, Canada. In 2014, he opened his namesake first-ever Omakase-Only sushi bar in Canada, Yasu; which received high acclaim and multiple awards from the local media. In 2019, he opened his second location in Beverly Hills, California.